skip to main | skip to sidebar

It has been almost 9 years since my last post so I guess an update is due. I dug up the old game project and ported it to WebGL so it is now playable. I had to fix a lot of the code and some shader issues to update the game to the new Unity. It was pretty interesting updating the project, I might make a video about it if anyone is interested in how to revive a 9 year old project.

While I was updating the game, I changed the following things:

After I first made this fan game, I did want to continue it. I modeled and animated the Goriya enemy and had layouts for the 2nd and 3rd palaces. However, after seeing how Nintendo DMCAs these types of projects I figured it wasn't worth it. I'd much rather create an original IP with a similar look and feel. But that would require a lot of original artwork and other assets. So if anyone is interested in doing 3D modeling / animation, and another person wants to do music / SFX, let me know.

For now, enjoy the game as it is, and feel free to send me any bugs you find. Now that the project is updated I can more easily fix things.
Posted by MikeJ at 4:24 PM 7 comments:

Making the game
This game was incredibly fun to make. I am a fan of the original NES game and love its innovations and clever game design. But as we all know, Zelda games are long and complex. When starting this project I had to choose very carefully what I had time to accomplish if this game was ever to see the light of day. As a result I decided to remake the beginning of the game up to the end of the first boss. This seemed simple enough, but I knew it would be a challenge. This is the result of my learning programming for the first time and a labor of love making this game in 3D.

Walkthrough
Stay on the path, you are safe there. Follow the path and enter the lone tile of woods. Pick up the money bag and exit (walk far enough from where to started to exit an area). Cross the desert to the little mountain. Inside, buy the meat. Walk toward the temple on the water and go to the mountains behind it to find another cave. Pick up the rupee. Fight a few enemies to gain at least 60 rupees. Go back to the desert shop and buy the Candle for 60. Head left from the shop as far as you can go to find the main Cave. (From the town you can see the cave). Now the cave should be illuminated and you can find the skeleton holding the key. (Hint: it is possible to find the key in the dark, saving you 60 rupees). Instead of heading to the Dungeon right away, walk all the way to the right to the edge of the water. On your right is a path to the secret Heart Piece. You really need this to survive the dungeon. Not only does it give you one more life square, it also halves damage you receive. Getting to the Heart piece you will need to cross some platforms. Try to diagonal jump (holding down forward and to the side) for bigger jumps. The last platform is a little farther away than the others so watch out. Once you have the Heart Piece, enter the dungeon.
The Dungeon:
Look up or down and press forward to use the elevators. Kill the first two Blobs then take the key. To fight the Stalfos (skeleton) walk at it and press shift to crouch. It is only vulnerable in the legs. While crouched you can still move slowly, but you need to be close enough to attack. Practice running and crouching and you can defeat the Stalfos without taking any damage. Continue through the locked door. Bubbles (flying skulls) have lots of hit points, but give you 20 rupees. Although annoying to kill, they are useful for getting lots of money. After this corridor, is a room with two Stalfos. Fight them one at a time. Don't go down the elevator yet. Go to the next room and fight one Blob and one Stalfos. If you touch the Fairy it's a one time heal, only use it if you have to. Go up the elevator close to the Fairy and get the Key. Go back to the room that had two Stalfos and go down the elevator. Cross the bridge (get the money bag) and kill the Blobs. To fight the Ironknuckle (knight) you can only hit it in the head. Jump at it and stab it in the head. Ummm... good luck. (See, I told you the Heart Piece is important). After you beat the Ironknuckle, get the Glove. With it you can break blocks. Go back to the Fairy and go up the elevator again. Now you can break the falling blocks and get the key. Go down the elevator to the very bottom. Break the blocks and defeat the two Stalfos. Unlock the door and fight the Ironknuckle. Now the next hallway leads to the final boss Horsehead. Don't fight him yet. At this point you should have almost 200 rupees. Go back to the room with all the Bubbles flying around and kill them until you have 200 rupees, or if you want extra help, get 250 rupees. Leave the Dungeon and go all the way back to the beginning area. Follow the path to the mountains past the mountain town. At the end of the path is the Wizard's shop. Buy the White sword for 200 rupees. If you have 50 rupees left or almost that amount, kill some more baddies and buy the Bottle from the desert shop for 50. The bottle heals you if your life drains to zero (one time use). Return to the Dungeon. Fight your way through the dungeon. It should be easier now. Use the Fairy just before the boss. Horsehead is the same as the Ironknuckles. Jump and attack him in the head. The bottle gets used automatically and if you take damage while its healing you, that damage will also heal making you temporarily invincible. Just don't let your life go all the way down to zero a second time or you'll die. Once Horsehead is no more, collect the key and place the gem in the statue. Congratulations, your done! The game doesn't force you to restart, so you can continue walking around. This is intended for people who did not get the Sword or other items and can now explore where to find them.

Changes from the original
The Caves: In the original these led to new areas or items that would be used later in the game. Since I wasn't planing on making those later areas I was left with three caves that no longer had a purpose. The idea to change them into shops from Zelda 1, I thought was a fun way to pay homage to the original game. Plus, they also served a purpose. Since I changed experience points into money, the game plays much more like the first game anyway.

Money: Leveling up was a huge departure from the norm in Zelda II. I still feel bad I didn't include it, but changing experience points into a currency just worked better for a short game. If I had the time to remake the whole game I'd definitely have a leveling up system.

Town: No towns. I know this must be disappointing to fans, but honestly, what do you do in the towns anyway? Making a large area with buildings populated by people that just walk around and have nothing to say, didn't seem like fun. So because I don't have infinite time and have to omit as much as I can, the towns never got made.

Magic: Again, no magic. The first two spells you get are shield and jump. Jump would be fun, and for a while I had it as a cheat code. But in some areas the player got stuck and it ultimately was a headache. Now there IS a shield magic, sort of. If you find the hidden heart piece it will level up your health and you will only take half damage.

Enemies: Bats? Moblins? Tinsuits? Well I had to pick and choose what enemies I had time to make (model, animate, program...) and some just had to go.

Locked Door in the Cave: Just a little extra puzzle I added, since the main item in the dungeon isn't the candle anymore. Hint: you can still get through the cave without the candle. (Only people who read this far down will know that 'o')


Graphics
"Whats up with that cave?! It slows my computer down so much". I know... I temporarily went insane while making it and modeled every bump on every wall. You'll need a pretty powerful computer to have it run smoothly.
"The dungeon also slows down my computer". That is a legitimate complaint. I tried making it smoother, sometimes it runs well, and times it doesn't. I am still updating the game.


Credits
This is a fan game made by Michael A Johnston. The original game, characters, sounds, and design are copyright to NINTENDO 1986/1987. This game was not made for profit and is purely for the enjoyment of fans.
Special thanks to Danny Johnston, for helping me with problem solving and support.
Posted by MikeJ at 8:03 AM 105 comments: 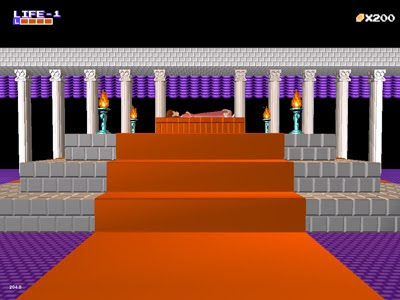 Now I'm adding the last few touches that were still missing. Today I added colliders to the starting temple scene and also sprite fire. For a while I had realistic particle fire, but it never looked right. I was surprised how much more nostalgic the fire looked when I made it a simple sprite instead.
Posted by MikeJ at 8:03 PM 7 comments:

I can't believe it, but it's almost done! Months of work and learning programming will finally pay off. There are still a few bugs but I'm planing to have the beta ready this week.
Posted by MikeJ at 4:08 PM 7 comments: 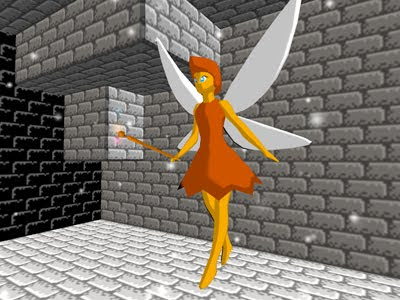 This was the last thing I had to model for my game. I left it for the end because it isn't very important but I didn't want to leave it out of the game.
Posted by MikeJ at 3:29 PM 2 comments: 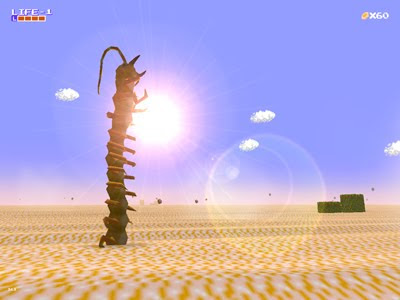 Added flying rocks to the desert area. I don't want to put cactuses in this area because the Saguaro cactuses depicted in the original game are a stereotype of american western deserts and shouldn't be in a desert like this. This is a personal protest against incorrect facts. In Banjo-Kazooie the desert level had the wrong type of cactus for an egyptian desert. They obviously did no research or even bothered to google a picture of what a real desert looks like.
Posted by MikeJ at 9:41 AM 5 comments: 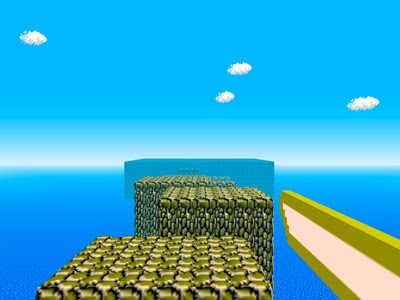 This is a small platforming section in the game just before you reach the first heart piece. I've had this place in mind since the beginning, so I designed the the tile set of the cave to also work for these outdoor platforms. The entire cave and this scene only take up 540KB even though there are over 300,000 polygons on screen.
Posted by MikeJ at 10:58 AM 16 comments: